We often say that “Temporal Server is a simple Go binary”, and it's true: Each release includes 4 docker images, but also zipped versions of our temporal-server binary. 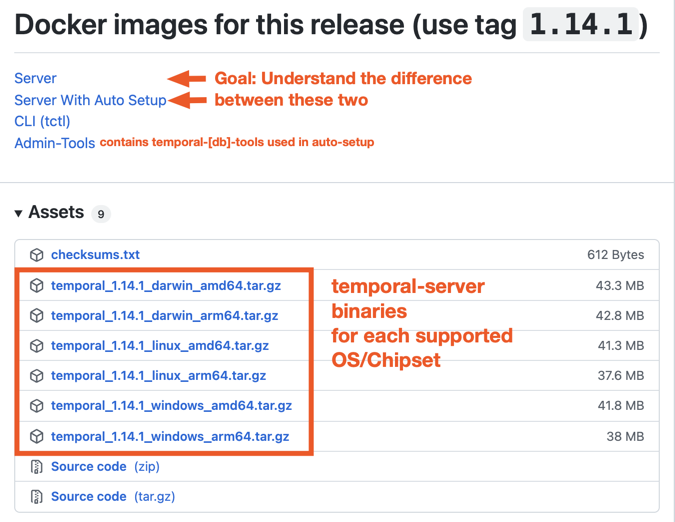 Yet most users are insulated from using this binary directly. There are several layers of abstraction to get through (docker-compose or Helm Chart, Dockerfile, and the auto-setup.sh script) before you reach this baseline understanding of Temporal (you can learn more in our Temporal Explained documentation. Together they map out the environment requirements of Temporal: 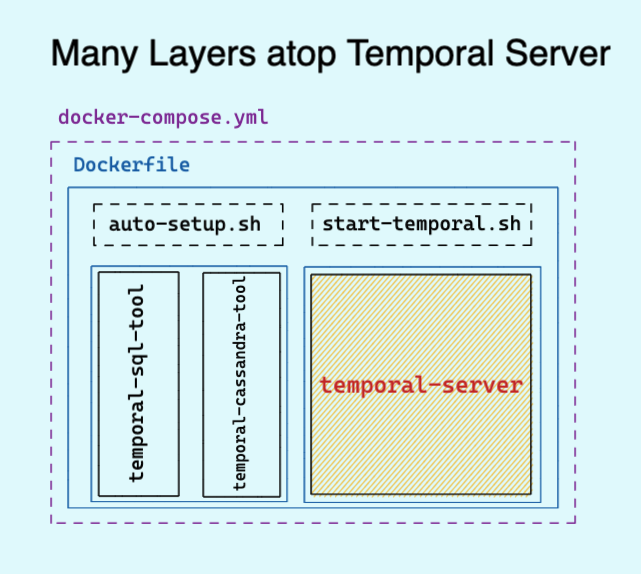 While the other pieces are industry standard formats with explanations available elsewhere, the auto-setup script is the most proprietary of them, and so essential that we often recommend beginners just use the temporalio/auto-setup Docker image for getting started (most beginners don’t even know this because we abstract it with docker-compose), before migrating to just the Temporal Server Docker image without auto-setup for production (where you can account for schema migrations and other tooling needs specific to your environment).

The goal of this post is not to explain every little detail (you can read the code yourself for that), but to highlight important pieces every self-hosted Temporal user should know. This should give you some great first-principles knowledge to deploy Temporal to anything from a simple VPS to a full Kubernetes cluster.

Auto-Setup at a High Level​

Our basic Docker entrypoint does some bindings, but most importantly, it runs auto-setup.sh then start-temporal.sh.

auto-setup.sh does a few things (we will go deeper on the bolded parts):

Side note: It is called "auto setup" because Márk Sági-Kazár, one of our early external contributors, coined it!

Database schema setup is only needed once for new databases being set up to work with Temporal Server, and is done with temporal-sql-tool or temporal-cassandra-tool depending on the type of database specified.

The schema setup process is pretty similar across all database types:

The schemas (both for initial setup and for updating) are worth browsing if you are interested in understanding Temporal at a database schema level, but be warned that these tables are considered Temporal internals and should not be relied on.

If enabled, Temporal’s Advanced Visibility Schema setup works in a similar way as described above.

Once the schema is setup, the setup_server function is started in a background process. This function waits for Temporal server to get started which happens in a meantime in the main process (in start-temporal.sh). When Temporal server is started, this function does one more important thing that users may take for granted - it registers the default namespace using the standard tctl --ns default namespace register command.

The final part of the auto-setup.sh script also does registers some pre-defined custom search attributes (when running with Elasticsearch):

These are intentionally generically named, for demo purposes (e.g. for code samples) and for ease of use (since they are already set up, you don't have to add them when you find you need them later). As you advance in your usage, you may wish to drop this step in favor of better named and specified attributes - just keep in mind that you are limited to a maximum of 100.

Now that you have a better idea of where Temporal Server ends and optional tooling begins, you can hopefully better adapt Temporal to your preferred infrastructure and recovery/upgrade tooling, and have more confidence in debugging issues as you support Temporal at your company. We are also working on more one-click-deploy solutions to other vendors like Render.

If you have followup questions, please feel free to ask on Discourse or Slack!